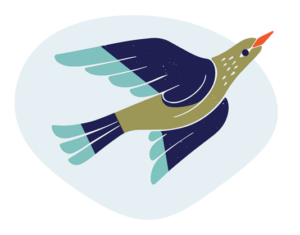 Every story has many potential starting points.

Hillside’s story could begin on the September afternoon when my Uncle Allan appeared on the porch holding an electric typewriter. That was my entry, at eleven years old, into hours of wonder in the hum of that machine, writing the openings of stories. When my imagination met the keys there would emerge a character, a place, a predicament. I was captivated by the promise of what could happen.

But another beginning came a little later, when I realized I was not alone. In the handwriting of certain devoted teachers, squeezed into the margins of pages I’d turned in, I discovered an attentiveness to my words that often took me by surprise. What I had set down and how had been picked up and examined. I’d entered a conversation, and in it, I felt the promise of what could happen next.

I know that Hillside began again — or further? — after college, each time my boss, novelist John Irving, handed me marked-up pages of a manuscript chapter, requesting a clean copy for his next round of revisions. In his blue ink I found another conversation, one that carried on across thousands of manuscript pages: the writer’s internal, recursive, creative deliberations.

But then, a core discovery: of all the points in the making of a piece of writing — between the initial creative impulse and the satisfaction of placing words in their final, resolving order — I still liked the beginning best.

I delighted in this education, and later, as an editor at The Atlantic, I was invested in the process of sharpening pieces for print. But then, a core discovery: of all the points in the making of a piece of writing — between the initial creative impulse and the satisfaction of placing words in their final, resolving order — I still liked the beginning best. Where imagination first meets process. With that realization, I headed back to the classroom, where students’ relationships with their voices on a page were still new.

There I recognized how important it is that students experience writing as a writer does — not as an academic subject ending in a grade but as an artistic practice of ongoing imaginative discovery. The conversations that I was now initiating, as a teacher, evolved into ways of instructing and encouraging student writers that I carried with me when I founded Hillside.

My new environment brought new conversations — dialogues with other practicing writers driven by a love of story, curiosity about human experience, and teaching writing as discovery. We built our coaching community around our shared belief in the growth a writer encounters through pursuit of a creative project. I invite you to read about how our coaches encourage this growth in the essays we have posted on our blog.

To coach at Hillside is to be on the slope and on the turning paths with fellow writers, progressing to greater vision by tending to the innumerable smaller visions, sentence by sentence. The joy we find in our coaching enhances our own creativity.

With our belief that everyone has meaningful stories to share, we invest in the growth of writers. The relationships we form, the creative potential we uncover, and the stories we nurture stem from our responsive talents. Through curiosity and expert listening, we find and celebrate the details that inspire confidence.

We model close attention and honest self-reflection. As writers, we know these practices lead to insights that forever reshape our understanding of ourselves and our experiences. We share this transformative gift with our clients.

Imagination is our workshop and our meeting place. We teach ways of seeing that close the distance between the self and others. Our commitment to process turns the possible into the actual.